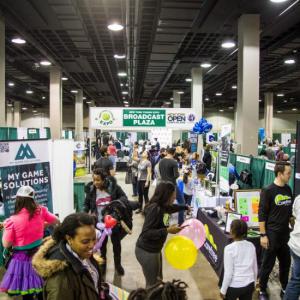 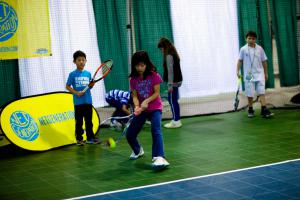 LONG ISLAND, UNITED STATES, February 28, 2018 /EINPresswire.com/ — More than 3,700 attendees came out for the New York Tennis Expo on Saturday, February 10 at NYCB LIVE home of the Nassau Veterans Memorial Coliseum in the largest event of its kind in the country.

The event was free to attend and over 60 exhibitors and sponsors from the tennis world and more filled the Expo Hall to showcase their companies and services to the attendees.

“It truly was a first-class, professionally run event,” said Josh Ripple, New York Open Tournament Director. “It was the best fan experience from an interactive standpoint. It served as the best way to present tennis on Long Island in a way that even I underestimated.”

There were fun things to do and events all day-long, highlighted by the Expo’s array of activities. The tennis teams from Fordham University, New York Institute of Technology, Farmingdale State and Nassau Community College were on the Grandstand court throughout the day conducting clinics and playing points with attendees.

The Activity Zone was located inside the Expo Hall, and featured a multitude of things to do. New to the Expo was a Beach Tennis Arena, which was packed all day long and run by New York Beach Tennis pros and gave guests a sense of summer fun in the middle of winter.

There were two 10&Under mini courts, sponsored by USTA Eastern, where pros would work with kids as a part of Net Generation Clinics.

“I would say our favorite part has been the activities for the kids,” said Simone Martin of Queens, who brought her two children to the Expo. “They loved the 10&Under courts and they also got to play on the court where the professionals are going to play. The interactive activities going on here have been great.”

The Expo had the tennis world covered for all ages and levels, ranging from 10&Under tennis all the way through the professional ranks, as throughout the day guests were able to watch professional players, including Kei Nishikori and the Bryan Brothers, practicing on the Stadium Court as they trained ahead of the start of the New York Open.
The Expo covered the fashion aspect of tennis as well with a Tennis Fashion Show in the afternoon, which showcased some of the latest trends in tennis apparel and accessories.

We were lucky to have some of the sport’s top local coaches and minds take part in our two Speaker Seminars during the Expo. The first was “The Road to College Tennis” and was headlined by former collegiate stars and current ATP Tour players Chris Eubanks and Cameron Norrie; the second panel focused on “Taking Your Game to the Next Level” and featured ATP player Dudi Sela of Israel joining the renowned panel of coaches and experts.

The center of the Expo hall was home to the New York Tennis Expo Broadcast Plaza where video and radio interviews with exhibitors and attendees were conducted throughout the day. As the lead-in event for the New York Open, the tournament’s Draw Ceremony was held at the Broadcast Plaza and featured appearances by Ryan Harrison, Jared Donaldson and Sebastian Korda.

Canadian star Eugenie Bouchard, who participated in the New York Open’s Opening Night Premiere, stopped by for a meet-and-greet with guests and sign autographs.

The Expo was a celebration of tennis that brought together the community for a free day of family fun to usher in the debut of the New York Open. It could not have been possible without local support, and the support from many companies and people nationally and internationally, in addition to the nearly 4,000 attendees who came out to make the event such a success. We are looking forward to the upcoming spring and summer seasons in our area and to see the sport of tennis continue to grow!