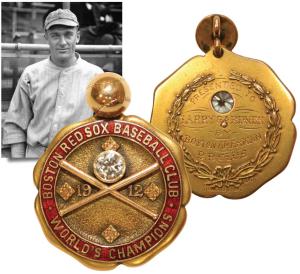 Collection also includes Cleveland Indians 1920 World Series Championship player's pin, believed to be the only one of its type ever to reach the marketplace

Because the pieces have come to auction directly from the Gardner family, they have impeccable provenance and authenticity, which is of prime importance to collectors.”
— Michael Russek, Grey Flannel Auctions

SCOTTSDALE, ARIZONA, UNITED STATES, December 11, 2018 /EINPresswire.com/ — After more than a century of care and safekeeping in the same family, a small collection of rare, early-20th-century World Series Championship jewelry is headed for the auction block. Grey Flannel Auctions will present the heirloom jewelry collection as the featured highlight of its online and phone auction that closes for bids on December 19.

The pieces were awarded to William Lawrence “Larry” Gardner (1886-1976), a third baseman and four-time World Series champion who played for the Boston Red Sox, Philadelphia Athletics, and Cleveland Indians. His Major League Baseball career began in 1908 and concluded in 1924.

“This is an extremely important selection of early championship jewelry,” said Grey Flannel Auctions spokesman Michael Russek. “Because the pieces have come to auction directly from the Gardner family, they have impeccable provenance and authenticity, which is of prime importance to collectors at the high end, just as it is to every level of buyer.”

Among the other baseball highlights in the auction is an all-original 1954 flannel jersey worn by New York Yankees icon Mickey Mantle, with attribution to the 1953 World Series. The jersey offered by Grey Flannel is autographed by the legendary slugger and is the earliest all-original Mantle home jersey the company has ever handled. It has been graded a perfect A10 by Dave Grob of MEARS.