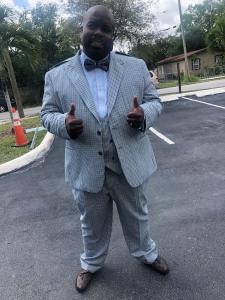 Joy cometh in the morning.

And for congregants at the New Beginnings Church and its media-beleaguered pastor, there is a morning after.

Pastor Eric Readon and his church had to withstand an onslaught of negative and slanderous press, gossip and innuendo to be able to maintain their sanctuary at 2125 NW 155th Street in Miami Gardens.

Their church is no longer under the threat of being taken in a foreclosure process due to the tenacity and never-give-up attitude of its pastor. And the church members and well-wishers are singing his praises.

“I actually heard they announced it on one of the local radio station,” said Tyrone Spear, the church’s former board chairman. “Who goes on a radio show and announces something like that? Who does that?”

Spear said that some of the media was picking on Readon and indirectly, the church.

“I have friends and they hear something negative and they ask me, ‘are you a member of that church?’ said Spears.
“I see where he is trying to come from, I don’t pay it no mind.”

Spear said that he never had any problems with Pastor Readon in handling the church’s business.

“He has excellent character. He’s a good man. I have seen over the years, where he has donated to different causes. I don’t tend to get into the gossip.”

Dana Brown is a longtime member of Readon’s church and owns a local takeout restaurant. Brown said when her clients find out that she attends Readon’s church, they would ask “That’s your pastor?”

And then she would find herself defending her pastor.

“I don’t think it is true, I don’t believe all of it is true, said Dana Brown. “ I do know he had a past. And nobody is perfect.”

Brown prefers to judge her pastor based on his present actions and how well he is doing now. She said the jury is still out after all the bad press he has endured.

“With all that being said about Pastor Readon, it never came out he was guilty. So people went with what they were saying in the newspapers.”

“I know that he has been engaged in a long and protracted struggle to save the church, said Gordon Watt, a local lawyer who has represented Readon in the past.

“I was impressed by his faith and belief and never losing hope. He had a positive attitude and incredible ability to persevere.

“He overcame them. I liken it to a miracle. And in the end, the church was saved.

“The lenders were trying to take the church from him. I monitored it and I saw how it transpired. As a lawyer. I was impressed by how good his lawyers were,” said Watt.

“This is a church in the community and it was going to be lost.” said Watt. He [Readon] saved the church for his congregation.
From a legal standpoint, it was a challenge. Most people would have given up.”

Watt knows that Readon was active in the community in trying to prevent gun violence and may have stepped on some local community leaders toes. The negative press started after Readon’s enemies started calling local reporters.

“There is no perfect person. Jesus Christ came pretty close,” said Watt. “Judging a man by whatever flaw you can find is not fair.”

Readon said there have been dozens of local churches in Miami Gardens which have been struggling with foreclosure proceedings It is not easy to keep a church financial viable.

“There are alot of churches boarded up, said Readon. “I never heard of any other media talking about a church foreclosure.

“On behalf of the congregation of New Beginnings Church, I would like to announce that our sanctuary and place of worship has been saved from foreclosure,” said Readon.