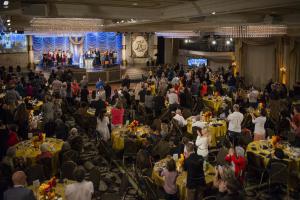 CLEARWATER, FLORIDA, US, January 16, 2020 /EINPresswire.com/ — On Saturday, Jan. 11, the Scientology Volunteer Ministers (VM) of Florida acknowledged more than 130 Florida VMs for their hard work throughout 2019 at their annual Recognition Awards Banquet in the Fort Harrison auditorium in downtown Clearwater.

Over 260 attendees witnessed the awards ceremony and Florida VM Executive Director Glendy Goodsell’s review of the VM’s humanitarian aid in the Bahamas post-Hurricane Dorian: 600,000 pounds of food served in partnership with local government and fellow disaster response organizations, 100,000 pounds of debris cleaned up and over 600 Bahamians directly helped by Florida VMs.

“Volunteer Ministers have been at every disaster site since the September 11 attacks, bringing humanitarian aid and Scientology solutions for everyday problems to every corner of the world,” said Goodsell. “The courage and willingness of the VMs who go into these disaster zones where all hope is lost deserves to be acknowledged.”

To learn more about the Scientology Volunteer Ministers visit www.volunteerministers.org or call the Florida VM center in downtown Clearwater at 727-467-6965 for volunteer opportunities.

The Scientology Volunteer Ministers (VM) program was launched more than thirty years ago, in response to an appeal by Scientology founder L. Ron Hubbard. Noting a tremendous downturn in the level of ethics and morality in society, and a consequent increase in drugs and crime, Mr. Hubbard wrote, “If one does not like the crime, cruelty, injustice and violence of this society, he can do something about it. He can become a VOLUNTEER MINISTER and help civilize it, bring it conscience and kindness and love and freedom from travail by instilling into it trust, decency, honesty and tolerance.” The program has adopted the slogan: “Something Can Be Done About It.” At the Scientology Volunteer Ministers center in downtown Clearwater, VMs are trained in the 19 chapters of the Scientology Handbook, basic first aid and safety techniques.