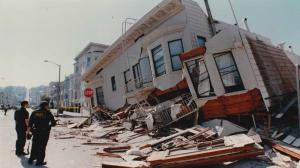 Only 15 seconds of shaking 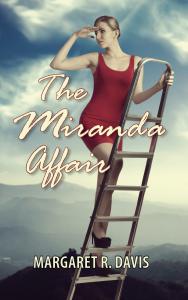 It all starts with an earthquake

It is a terrifying experience to be in a tall building while it sways as if being shaken by a giant hand.

I felt real fear because I knew the freeways in this area were built high in the air on complex overpasses.”
— Margaret R. Davis

After living in California for over 50 years, I’ve experienced my fair share of earthquakes, all of them while working in downtown San Francisco. It is a terrifying experience to be in a tall building while it sways as if being shaken by a giant hand. The most devastating tremor to hit San Francisco in recent decades was the 1989 Loma Prieta earthquake which I also experienced but which, paradoxically, I didn’t find so scary as others because I was outdoors at the time. It is the 1989 earthquake that plays a key role in my novel, The Miranda Affair.
On October 17, 1989, at 5:04 p.m., I had just left my office in San Francisco’s business district and was waiting for my bus at the corner of the street. Beside me, there was a large parking lot with a wire fence separating the sidewalk from the cars in the lot. Suddenly, the cars started to surge back and forth as if straining to escape the confines of the fence. Simultaneously, the surrounding buildings began to shake, followed by loud crashes as window ledges and brick facades fell to the street below.
My immediate concern was would I get home that night? There were a few other would-be passengers at the bus stop with me. No one said anything as though things like this happened every night. A few minutes later, to my relief, my San Mateo transit bus drove slowly around the corner and pulled up. We all climbed aboard. The bus driver appeared to be the most disconcerted of us all. “What should I do?” he mused aloud. “Just follow my normal route?” No one answered. So he followed his normal route through the crowded downtown streets, making all his usual stops, but with many a detour to bypass a gridlocked intersection.
It was a surreal journey. At every stop, anxious people surged forward asking where we were headed. One man said, “Not that I care. I just want to get out of this city.” The further we progressed, the more horror stories we heard from anxious would-be passengers who’d been listening to their portable radios. “The Bay Bridge has fallen down.” This report produced agitated murmurs from everyone on the bus, although there was resulting agreement that this news was too far-fetched to be true.
Traffic lights were not operating. People and vehicles randomly covered streets and sidewalks. And there were the strangest sights. On one street we drove by, people sat at outdoor tables, drink in hand, appearing to enjoy the afternoon sunshine. In other cases, rubble blocked whole streets. In a couple of streets—to my astonishment, for I had never witnessed this in my life before—there were looters, breaking into buildings and making away with office equipment and furniture.
Finally, we left the business district and headed toward the #101 highway going south out of town. And, now, for the first time in this drama, I felt real fear because I knew the freeways in this area were built high in the air on complex overpasses. Just ripe for collapse in an earthquake! I was tense with anxiety as our doughty driver unhesitatingly ploughed on, following his normal route. Happily, at that time, none of us on the bus had heard the catastrophic news from Oakland where a double-deck freeway had pancaked leading to considerable loss of life.
We crossed that delicate man-made structure without incident and drove on for some 25 miles until I reached my stop in Belmont. It was two and a half hours after I first climbed aboard. Not too bad, considering.
Back in my Belmont home, I found nothing disturbed. There was not even a crooked picture on the wall. The power was still on. I soon found that I had been remarkably lucky.
The Loma Prieta earthquake, named after the Loma Prieta Peak in the Santa Cruz Mountains south of San Francisco, registered 6.9 on the Richter scale. It had a devastating impact in Northern California being responsible for 63 deaths, over 3,700 injuries, the collapse of major freeways and other structures from downtown high-rises to private homes. Buildings not properly bolted to their foundations fell to the ground. Others were destroyed as gas mains ruptured and fires broke out. There was widespread liquefaction of soil that had been compacted to create waterfront land.
There were good consequences too. As it happened, a part of the Bay Bridge really did fall down. This catastrophe sparked the eventual rebuilding of a whole span of the bridge. Higher safety standards were adopted in the reconstruction of highways, high rises and homes to make the City by the Bay better able to weather its turbulent underpinnings.
Sometimes, I wonder what happened to our bus driver on that bizarre journey home on October 17. Did he drive back to the city and into all its turmoil again? Did he get safely back to his own home that evening? Did I remember to thank him when I left the bus? An unsung hero.
.. .. .. .. ..
Margaret R. Davis’ novel, The Miranda Affair, published by Sand Hill Review Press LLC in 2017, is available at bookstores and online. It’s the story of one woman’s determined attempt to climb the corporate ladder in a large corporation while battling political and personal complications. The action takes place in San Francisco in 1989.