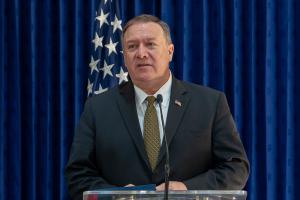 US Secretary of State Mike Pompeo

WASHINGTON, DC, USA, January 25, 2020 /EINPresswire.com/ — The American Mideast Coalition for Democracy strongly supports Secretary of State Mike Pompeo and the US government’s position on withholding aid to the recently-formed, Hezbollah-dominated government in Lebanon.

“The test of Lebanon's new government will be its actions and its responsiveness to the demands of the Lebanese people to implement reforms and to fight corruption," said Secretary Pompeo. “Only a government that is capable of and committed to undertaking real and tangible reforms will restore investor confidence and unlock international assistance for Lebanon.”

As demonstrations continued across the country, it is clear that the new government formed by the Iranian terrorist proxy Hezbollah and its allies will not satisfy the people’s demand for clean government.

“The new government formed in Lebanon this week lacks legitimacy in the eyes of the Lebanese Revolution and is still beholden to the mullahs in Iran and their proxy, Hezbollah in Lebanon,” said AMCD co-chair, John Hajjar. “Secretary Pompeo is to be congratulated for his lack of endorsement, but he and the Trump Administration need to go further in supporting the Revolution. Sanctions and travel bans need to be implemented against those in the former government and those in the new. Nothing but a wholesale clean-up of all the clans, militias and hereditary politicians will be able to restore the confidence of the long suffering people of Lebanon. Absent that, Lebanese in each region should install their own organic governing structures and shake off the noose placed around their necks by the mullahs, Hezbollah and their ilk.”

"The US should demand that the newly formed Lebanese government declare the implementation of United Nations Security Council Resolution 1559 which would force Hezbollah to disarm and disband.” added AMCD co-chair, Tom Harb. “Members of Parliament should consider giving votes of confidence based on progress toward that goal.”

AMCD strongly supports Secretary Pompeo’s strong stance in opposition to Hezbollah’s continued domination of Lebanese politics and its corrupt suffocation of the Lebanese economy. Hezbollah must be expelled from the government. Then, and only then, should aid and investment be resumed.