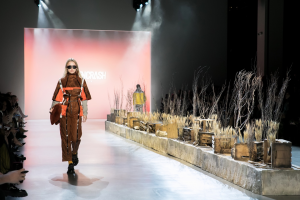 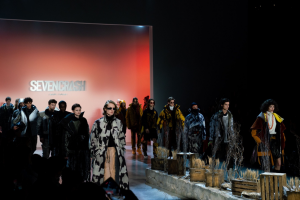 NEW YORK, NY, UNITED STATES, February 15, 2020 /EINPresswire.com/ — New York, NY – On February 12, 2020, SEVENCRASH returned to New York Fashion Week: The Shows Official Schedule at Spring Studios with a runway presentation of its "EVOLUTION" collection for the Autumn/Winter 2020 season. From possibilities of survival on a future planet (GLIESE 581D planet series) to the adventurous spirit of exploring the micro-quantum world (QUANTUS series), and most recently the Spring/Summer 2020 series (THE LAB), which utilizes environmentally-friendly textiles to express the importance of sustainability for the future, the brand continues to explore new territory. This Autumn/Winter “EVOLUTION” collection seeks to inspire meditations on the role and impact of technology in the future.

Backstage at Spring Studios after the show, brand CEO Jason Yao said, “As a disruptive brand, we believe in progress and staying ahead of the curve, in the current climate, sustainability needs to be and will be every brand’s number one priority. Every season we have been devoting more and more of our resources to researching and developing sustainable textiles and increasing the role they play in our design process. This is our mandate and an integral part of our corporate culture.”

Bidding farewell to 2019 and entering the 21st century’s ‘20s, the once unreachable future has arrived, bringing with it rapid changes generated by science and technology. The convenience of real-time communication, the transformation of personal finance and mobile payment – new wonders such as these and more signal the onset of potentially radical development. SEVENCRASH's inspiration this season derives from the accelerated technological advancement that inspires people to pause, reflect, adjust, and connect.

The year 2065 is imagined, where technology has led to an overexploited earth, and artificial intelligence has brought on an existential crisis. These dystopian phenomena are explored through the collections’ three series – from prosperity to decay and, finally, to nirvana.

PROSPEROUS Series
The rapid progress of science and technology, and artificial intelligence, has advanced the human process, and enabled people to live convenient and fast-paced lifestyles. The PROSPEROUS series used exaggerated large-scale silhouettes and futuristic biotechnology green to portray thriving states of the lives of humans. The series extensively employs technology to blend colors, the collision of color polished rod fabric to show future geological features, and the combination of three-layer woven fabric with transparent TPU to ensure temperature balance.

DECAY Series
Humans of future earth may well find themselves surrounded by destruction and chaos. Excessive urban development could result in a general barrenness and population-decline. Due to the dangerous atmosphere created by the development of artificial intelligence, the few remaining humans on earth have to find new means to survive. Inspired by pollution and destruction, the DECAY series uses the “destructive” spray washing/finishing process and carbon pollution color digital printing to express the atmosphere of earth's imminent destruction. The ingenious use of orderly interlaced weaves of filled plume, with tangled tassels running through and under them, mapped out the future of technology and how its development will likely take human civilization to an incalculable plane.

NIRVANA Series
The true meaning of "love" and "life" is to achieve a balance between technology and ecology. The NIRVANA series incorporates the demand for freedom within a mix of novelty and dissonance. Garment silhouettes were disproportionately combined to form explosive stacks and kits, forming a harmonious new silhouette born of conflict. The same amalgamation applies to the fabric and decoration. The abstract camouflage printed fabric, the complete three-dimensional structure, the reorganization of the collection of clean and large outline shapes, with the various items carried in the removable backpack, demonstrate a glimpse of hope for a better future.

SEVENCRASH endeavors to galvanize the collective human fear for a dystopian future with sartorial musings on an alternate possibility — the possibility of perseverance.