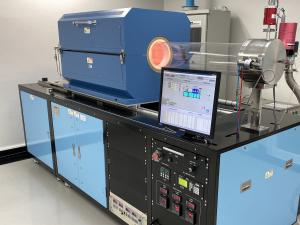 Shown above is planarTECH’s largest system in the world, a planarGROW-8S installed at the National Electronics and Computer Technolgy Center in the Thailand Science Park. This system serves as the prototype for planarTECH’s higher capacity production syst

Many industrial customers want scalable, consistent and economic production of graphene, which we can now provide.”
— Ray Gibbs, Non-Executive Chairman of planarTECH

planarTECH has averaged sales of £1m pa since its formation in 2014. Today the unexecuted order book is £295,000, with a strong pipeline of indicative future purchase orders exceeding £1m for Graphene and 2D material CVD systems.

The use of proceeds will go towards:

Expansion of its business by continuing to supply R&D systems, especially into Asia;
Initiating a dedicated system support service;
Offering industrial-scale systems (it already has strong interest from several potential customers); and
Selectively producing CVD graphene materials on a toll-processing basis for commercial customers in the coatings and electronics markets.
Some funds will be applied to capitalising on the strong interest for its R&D systems for next-generation 2D materials (such as molybdenum disulphide – MoS2).

“planarTECH’s success with academic and R&D customers means that the company has access to extensive insight into the graphene application pipeline, and we can now see the graphene tipping point with industrial applications following demand pull from corporations. Many industrial customers want scalable, consistent and economic production of graphene, which we can now provide.”

According to a recent report from market research firm Acumen Research and Consulting, “The global graphene market is forecasted to grow at a CAGR around 38.2% over the forecast time frame 2019 to 2026 and reach around US$ 552.6 million by 2026.” planarTECH has seen first-hand an increasing demand from industry for CVD graphene solutions and is launching new industrial-scale CVD products to meet this demand.

“When I started planarTECH, I knew there could be good business in the field of graphene, but I never dreamed we would have the success we’ve seen with over 65 system installations worldwide. Now, we hope to capitalize on increased industrial interest in graphene and move into new markets by providing production systems or coating services to industrial customers.”

More information about planarTECH’s equity crowdfunding campaign on the Seedrs platform can be found at https://planartech.seedrs.com.

planarTECH, founded in 2014, primarily supplies Chemical Vapor Deposition (CVD) equipment for the production of graphene as well as other emerging 2D materials. The company previously focused on research institutes, and already sold over 65 systems with cumulative revenues exceeding £5,000,000 and a customer list that includes the University of Manchester’s Graphene Engineering Innovation Centre, the University of Cambridge’s Cambridge Graphene Centre, Stanford University and the Centre for Advanced 2D Materials at the National University of Singapore, among others.

The business has two operations currently being the UK and USA and has intentions to set up in Asia due to known demand in that region for both systems and industrial scale up. planarTECH is differentiated from other Graphene producers who use graphitic material as their pre-cursor source of supply.

Mr. Frantz has over 15 years of experience of technology business development working directly in the Asian supply chain. He founded planarTECH in 2014 and the company exceeded £1,000,000 in turnover by 2015. In addition, Mr. Frantz managed the Asia operations of Haydale Graphene Industries plc (LON:HAYD) bringing it from 0 to 20 staff across 3 sites in 5 years with annual turnover exceeding £750,000.

planarTECH recently recruited Mr. Ray Gibbs as non-executive chairman of the company. Mr. Gibbs is currently the Director of Graphene Commercialization at the University of Manchester’s Graphene Engineering Innovation Centre and was previously the CEO of Haydale Graphene Industries plc, which he successfully took public in April 2014. A renowned public speaker Mr Gibbs has been engaged in the nanomaterials and Graphene market for over 10 years and is Chairman of the Joint Working Group on implementation of standardisation between the UK and China.

Seedrs allows all types of investors to invest as little or as much as they like in businesses they believe in and share in their success. And it allows ambitious businesses in all sectors to raise capital and build community through an efficient, online process.

Seedrs has funded over 940 deals to date and has had over £790 million invested on the platform. All investments made through Seedrs offer voting shares to investors and use professional grade subscription agreements. This ensures that investors get the same level of protection that angel investors and venture capitalists enjoy.

Seedrs is backed by leading European institutional investors as well as over 4,300 of its own customers. Seedrs is authorised and regulated by the UK Financial Conduct Authority.