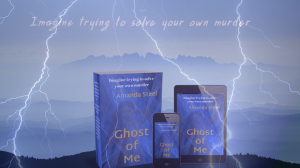 MANCHESTER, GREATER MANCHESTER, UK, February 17, 2020 /EINPresswire.com/ — Ghost of Me is the new novel by Amanda Steel, about a ghost trying to solve her own murder.

BLURB
Imagine getting the chance to solve your own murder. For Sarah, the prospect becomes a reality after finding her dead body in the morgue and deciding that the injuries sustained indicate she was murdered.
She won’t let being a ghost stop her from tracking down the murderer and stopping him from killing again. However, she’ll need help from someone living. She finds that help in the form of Steve; a near recluse who sees ghosts and isn’t thrilled at the idea of Sarah appearing in his house whenever she feels like it.
Can they work together and save lives, or will more women have to die?

Amanda is a multi-genre author, copywriter, ghost-writer and podcast co-host – with her own literary magazine, which supports new and experienced writers.
This is her first step into writing crime, with a supernatural twist.
She has already done several radio interviews and can be contacted for an interview or to arrange review copies.