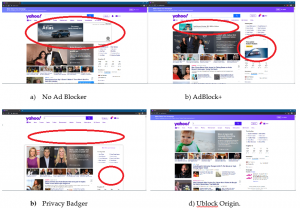 Some of the results of a new study on open source ad blockers. Some ad blockers block the add and leave white space, but uBlock Origin cuts all ads and makes more content viewable on the screen.

A new study shows open source ad blockers would save the average Internet user more than 100 hours a year while also saving energy and pollution.

Although free and open source ad blockers save energy and are good for the environment, people use them primarily to block annoying ads and save themselves time.”
— Professor Joshua Pearce

HOUGHTON, MI, US, March 31, 2020 /EINPresswire.com/ — A new study meant to investigate energy conservation of free and open source ad blockers has unexpectedly shown that Internet ads are wasting shocking amounts of your time.

More importantly, the results show how you can get that time back. The study estimates that the average Internet user would save over 100 hours a year by using uBlock Origin, a free and open source ad blocker. “uBlock Origin was the most effective ad blocker tested, but all ad blockers save time, energy and money”, explained Joshua Pearce, a Professor of Engineering at Michigan Technological University.

The results show that page load time dropped 11% with AdBlock+, 22% with Privacy Badger, and 28% with uBlock Origin. These are not significant on a single page, but Internet users spend more than half of their time online rapidly clicking through websites spending less than 15 seconds on a given page. “With all these clicks, the additional time to load ads really starts to add up,” says Pearce.

The article “Energy Conservation with Open Source Ad Blockers” published in the journal Technologies was originally conceived to address rising energy consumption. Internet-related electricity consumption is rising rapidly as global Internet users spend more than 6.5 hours per day online. Americans, for example, have more than doubled the time they spend online since 2000 to almost 24 hours a week. Open source ad blockers have the potential to reduce the time and thus electricity spent by eliminating ads during Internet browsing and video streaming.

In the study, three open source ad blockers were tested against a no-ad blocker control. Page load times were recorded for browsing a representative selection of the globally most-accessed websites including web searching (like Google, Yahoo and Bing), information (like weather.com) and news sites (like CNN, Fox and the New York Times). In addition, the study analyzed the time spent watching ads on videos for both trending and non-trending content. This part of the study was more challenging because of the lack of data on what ratio of YouTube watching time is spent on trending and non-trending content. The time wasted viewing ads per video ranged from 0.06% up to staggering 21%. Thus, total hours lost to loading ads was only recorded for browsing.

“Overall, the results showed that the energy wasted loading ads is not trivial,” summarized Pearce. As a lot of the electricity used for running computers continues to come from coal, which causes air pollution and premature death, the study analyzed the potential for ad blockers to save American lives. The results were shocking: the energy conserved if everyone in the United States used the open source ad blocker would save over 36 Americans lives per year.

Electricity costs money, so cutting ads could also save consumers money. Pearce said, “In the United States, if all Internet users enabled Privacy Badger on their computers, Americans would save more than $91 million annually.” Globally, the results of the investigation were even more striking. uBlock Origin could save global consumers more than $1.8 billion/year.

Pearce points out, “This study was done before everyone was forced to stay home because of the COVID-19 pandemic, so all the values can be viewed as conservative under estimates.” Overall, the study found open source ad blockers are a potentially effective technology for energy conservation.

“Although free and open source ad blockers save energy and are good for the environment, people use them primarily to block annoying ads and save themselves time,” concludes Pearce.