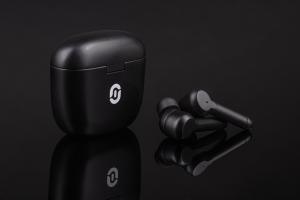 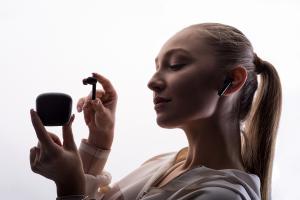 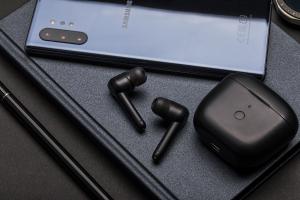 You’ll never leave home without it

ReduxBuds are earbuds that you don’t have to take out. They’re comfortable for hours on end and they filter through the sounds you need to hear—all without disrupting your music.”
— Lauren – Communications Manager

HONG KONG, HONG KONG, May 22, 2020 /EINPresswire.com/ — Redux Audio unveiled their flagship product last month on the popular crowdfunding site Kickstarter, and the response from backers was overwhelming. The true wireless headphones, ReduxBuds, were fully funded within the first hour of the campaign and went on to smash the initial funding goal by nearly 40,000% (totaling about 400K in just 30 days). The Kickstarter campaign has since finished, but ReduxBuds are still available for a special pre-launch price at https://www.reduxaudio.com/ for a limited time.

The true wireless earbuds offer an uninterrupted and ultra-comfortable listening experience thanks to an ergonomic fit and 100-hour battery. They also keep listeners safer and more engaged in the world around them. AI-powered transparency mode lets certain sounds pass through, such as traffic, sirens, and alarms as well as voices directed at the listener.

“We realized one of the biggest problems with true wireless earbuds was that you had to take them out often because of discomfort, sweat, traffic, or what have you. This is annoying and creates a potential for loss, as the earbuds aren’t connected by wires,” said Lauren, Redux Audio's Communications Manager. “ReduxBuds are earbuds that you don’t have to take out. They’re comfortable for hours on end and they filter through the sounds you need to hear—all without disrupting your music.” Backers clearly shared the creators’ enthusiasm, turning the ReduxBuds campaign into one of the year’s biggest successes among audio products.

The intelligent active noise cancellation (ANC) in ReduxBuds is one of the most advanced in the industry. Powered by artificial intelligence, the dual microphones on the earbuds are able to recognize over 6,000 distinct sound characteristics. This is how the earbuds “know” which sounds to block and which to let through to the listener. Listeners can choose between three noise-canceling modes: No ANC, ANC, and Transparency Mode (AI-powered). Each mode offers distinct benefits based on the listener’s needs and environment.

Apart from innovative artificial intelligence, ReduxBuds also feature groundbreaking speakers. Made using nanotechnology, the speakers utilize graphene to deliver studio-quality sound from a tiny wireless earbud. Graphene is an ultra-thin yet incredibly strong allotrope of carbon. The strength allows for the efficient generation of sound waves and provides ReduxBuds with clearer frequencies, more volume, and increased range compared to other true wireless earbuds.

ReduxBuds were designed by ergonomic specialists to fit snuggly in the ear canal. The pliable tips are soft yet hold tight, so listeners can enjoy their music on the go with comfort and confidence. ReduxBuds don’t wiggle or dislodge even when the listener is doing intense activity, and they don’t loosen due to sweat. ReduxBuds ship with multiple sizes of ear tips for full customization.

Offering nearly the convenience of wired headphones, ReduxBuds have 100-hour battery life. The earbuds feature 10 continuous hours of playback on a single charge, and their charging case holds an additional 90 hours of battery life. The case features fast charging via USB-C.

Additional features of ReduxBuds include:

● Bluetooth 5.0: The fastest wireless technology for instant pairing, zero-lag video-audio sync, and a wireless range of up to 30 feet.
● Dual Beamforming Mic: Call and give voice commands with clarity. ReduxBuds will pick up your voice no matter your surroundings.
● Hands-free Calling, Texting, and Digital Assistant Access: Get in touch, surf the web, and access Siri and Google with voice commands.
● Touch Controls: Control ReduxBuds with intuitive tap commands (not buttons) for greater convenience and comfort.

Explore ReduxBuds and take advantage of pre-launch pricing for a short while longer at https://www.reduxaudio.com/.

Redux Audio was founded in 2018 by an international group of audio engineers, ergonomic specialists, and business people. They were frustrated with all the flashy wireless headphones on the market that were feature-rich but uncomfortable and impractical. Redux Audio sought to make wireless earbuds that offered the listening experience and convenience of studio-quality wired headphones.

Featuring new AI technology, a groundbreaking 100-hour battery, and an ultra-comfortable inner-ear fit, ReduxBuds represent a balance between high audio tech and practicality. Redux Audio is proud to offer its AI-powered wireless headphones to a global audience after the success of its Kickstarter campaign.