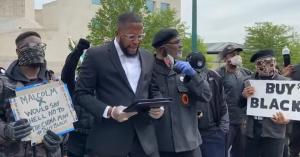 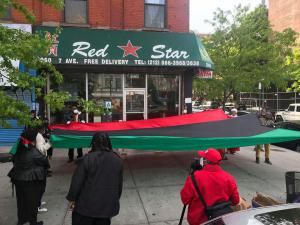 WASHINGTON, DC, UNITED STATES, May 22, 2020 /EINPresswire.com/ — Malcolm X Day – Tuesday, May 19, 2020, members of the Black-Empowerment Movement gathered in over 20 U.S. cities along with allies in Europe and Africa to commemorate the 95th birthday of Pan Africanist and Human Rights activist El-Hajj Malik El-Shabazz. You may know him better as Malcolm X. What makes this particular birthday celebration different than perhaps any other is that instead of having a parade or a party, the Coalition put boots on the ground to address the issue of Human Rights abuses committed in China and Africa by Chinese people against Africans.

The Buy Black Offensive and International Sanctions Campaign against China launched in Washington, DC in front of the Embassy of the People’s Republic of China in the United States where Dr. Malik Zulu Shabazz sent a strong and direct message to the Chinese government that abuses Human Rights against Africans and Afro-Descendant people; that go back as far as the 1960s and will not be tolerated any longer. Several Chinese restaurants were targeted for boycott as these are the most readily identifiable Chinese owned business in predominately Black communities. In St. Louis, once Harold’s Chop Suey got word they were being boycotted, they closed shop for the day.

In Harlem, the Red Star Chinese Restaurant got a visit from the Mid-Atlantic Region team of the New Black Panther Party. Members of NYPD were on the scene and sat by haplessly as that restaurant was bled dry of thousands of dollars of business during, what would normally be late lunch, early dinner hours. Similar scenes took place in Atlanta, Charlotte NC, London England, and Johannesburg, South Africa, many of the streamed LIVE over the internet as they occurred. The brain trust at Breitbart covered the event at the Chinese Embassy and lied that only Chinese restaurants were targeted for boycott. https://www.breitbart.com/politics/2020/05/19/new-black-panther-party-launches-boycott-of-chinese-merchants-to-protest-racism/

This is not true as Coalition partners, The Original Black Panther Party of Milwaukee staged their protest at the Chinese Chamber of Commerce, and The Hawaii Pan African Association exposed a Chinese owned garage for discriminatory pricing, labor law, and OSHA safety violations that resulted in that shop being closed for good.

Where the situation in Guangzhou was careless, reckless, irresponsible, and sloppy, the response was well-reasoned, organized, disciplined, and masterfully executed. As of now, people we had looked to for inspiration and allyship have failed to live up to the values taught by Confucius, Taoism, and Buddhism. Things will remain strained, tense, and uneasy until they return to walking along the right path.