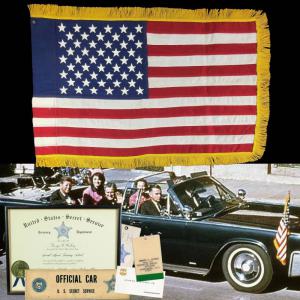 The American flag attributed and documented to have been flying over the right front bumper of the presidential limousine in the Dallas motorcade on Nov. 22, 1963 (est. $50,000-$60,000). 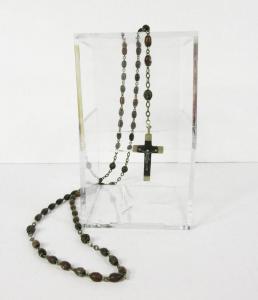 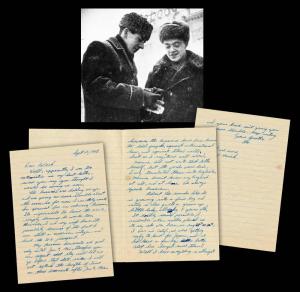 Three-page handwritten letter signed by Oswald and penned from Russia to his brother in 1961, reporting that authorities were “giving me some trouble about the visas” (est. $12,000-$14,000). 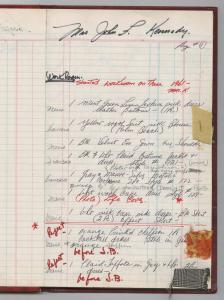 The relationship between Mrs. Kennedy and Oleg Cassini, her White House-era “Secretary of Style”, is explored through this studio ledger with fabric samples, 17 pages (est. $4,500-$5,500). 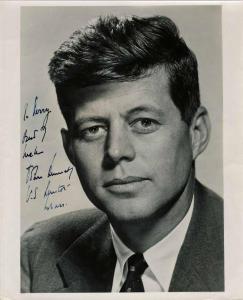 “University Archives pays tribute to America’s Royalty, the Kennedy family, with a spectacular themed sale consisting of more than 130 lots carefully selected from many different consignors,” said John Reznikoff, the president and owner of University Archives. “Kennedy collectors everywhere should mark their calendars for June 10th.”

The full catalog is already up and online for bidding and viewing, at the new University Archives website, as well as on the popular online platforms LiveAuctioneers.com, Invaluable.com and Auctionzip.com. Visitors will see that the collection of unique historical documents, autographed letters, photographs, mementoes, and relics represents three major areas for Kennedy collectors.

“First, the sale will explore the personal lives of John, Jacqueline, Robert, John Jr., Joseph Sr., and other members of the Kennedy family,” Mr. Reznikoff said. “Second, we are celebrating the political legacy of the Kennedy dynasty, from JFK’s days as a junior senator from Massachusetts to the White House, and to his younger brother’s later bid for the presidency. Finally, our sale is particularly strong in documenting Kennedy’s assassination in Dallas on November 22, 1963.”

Sale highlights include JFK’s personally owned rosary beads, previously gifted via donation by Jack’s mother, Rose Fitzgerald Kennedy, to Sister Fabiola Parent of the Sinsinawa Sisterhood in Wisconsin. “Sister Fab” collected rosaries from around the world for her Sinsinawa Rosary Museum. Rose sent her the 18-inch-long rosary beads as a gift, in 1974. This was after Sister Fab had fashioned a rosary out of rose petals that she gave to Rose as a gift (est. $15,000-$17,000).

One item certain to attract much attention, and a strong candidate for top lot of the auction, is the American flag attributed and documented to have been flying over the right front bumper of the presidential limousine in the Dallas motorcade (est. $50,000-$60,000). Impeccable provenance is supplied by George Hickey III, the son of Secret Service Agent George Hickey, Jr., providing a clear chain of custody from Nov. 1963 to today. Other items from Mr. Hickey are also included.

More than ten percent of the sale overall – 15 lots total – deal with Kennedy’s assassination. Among them is the iconic photograph of LBJ’s swearing-in ceremony aboard Air Force One, signed by the new president (Lyndon Johnson), the photographer (Cecil Stoughton), and the Air Force One pilot (James Swindal) (est. $3,000-$4,000). Stoughton wrote, "I took this famous photograph / 22 Nov. 1963 / Cecil A Stoughton / W.H. Photographer". The auction contains over ten of Mr. Stoughton’s personally owned (and in some cases annotated) photographic prints.

Seven lots pertaining to Lee Harvey Oswald provide great insight into JFK’s assassin. These include eyewitness accounts from emergency room physicians, arresting police officers and Dallas homicide detectives, as well as items from Oswald’s childhood from his brother Robert. A three-page handwritten letter signed by Oswald and penned from Russia to his brother in September 1961 reported that authorities are “giving me some trouble about the visas” (est. $12,000-$14,000).

Items documenting JFK’s political ascendancy are sure to interest serious presidential collectors. Two photographs from Kennedy’s early career are particularly striking (each est. $2,000-$2,400). The first is a Jacques Lowe portrait personally dedicated to a constituent, signed in part “from her friend, John Kennedy. U.S.S. Mass.” The second is an extreme close-up of a young Kennedy, circa 1953, signed and inscribed in part, “Best of Luck, John Kennedy U.S Senator – Mass.”

A letter dated Nov. 30, 1962 on White House stationery, signed by Kennedy (and possibly typed by him) regarding the National Cultural Center, which would be renamed the John F. Kennedy Center for the Performing Arts to commemorate the slain president, should sell for $1,500-$1,700. Scarce Kennedy campaign ephemera, including a handout promoting a speech JFK was to deliver at the University of Maryland on May 14, 1960, signed by Kennedy and picturing him below the phrase “See and Hear”, has an estimate of $800-$900.

Lots pertaining to Mrs. Kennedy’s passion for clothing and clothes design are particularly well-represented. The relationship between the First Lady and Oleg Cassini, her White House-era “Secretary of Style”, is explored through original sketches, studio ledgers with fabric samples (one of them 17 pages, est. $4,500-$5,500), correspondence, annotated fashion magazine pages, and Cassini-owned replicas of original Jackie designs, from the estate of Oleg Cassini (11 lots).

An exquisite brooch from jewelry designer Marcel Boucher, owned by Jackie and later gifted to Kennedy family secretary Mary Barelli Gallagher as a Christmas present in 1960, accompanied by Jackie’s handwritten note, should fetch $3,000-$4,000; and a letter written and signed by Mrs. Kennedy to Arthur Schlesinger, Jr., thanking him for his personally dedicated copy of the book A Thousand Days, signed both on the letter and envelope, has a pre-sale estimate of $1,500-$1,700.

An elegant dinner menu from President Kennedy’s 45th birthday held at the Four Seasons Restaurant in New York City in 1962 should reach $1,000-$1,200. The night was memorable as, later that evening, Marilyn Monroe serenaded JFK with her sultry rendition of “Happy Birthday, Mr. President” in front of 15,000 people at Madison Square Garden.

Contemporary American artist Robert Mars attempted to capture the esprit of Camelot when he produced a series of original artwork and hand-embellished artist proofs commemorating the Kennedys. Five of these are in the sale, offered as single lots. Many items in the auction – ranging from Jack’s swim trunks, Jackie’s photographic equipment and John-John’s baby gifts – reflect the human side of the Kennedy family. There’s something for every Kennedy lover in this sale.

University Archives has become world-renowned as a go-to source for rare items of this kind. It is actively seeking quality material for future auctions, presenting a rare opportunity for sellers. Anyone who has a single item or a collection that may be a fit for a future University Archives auction may call John Reznikoff at 203-454-0111, or email him at john@universityarchives.com.

University Archives was founded in 1979, as a division of University Stamp Company, by John Reznikoff, who started collecting stamps and coins in 1968, while in the third grade. Industry-wide, Reznikoff is considered the leading authenticity expert for manuscripts and documents. He consults with law enforcement, dealers, auction houses and both major authentication companies.