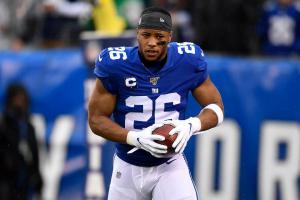 LOS ANGELES, CA, UNITED STATES, June 3, 2020 /EINPresswire.com/ — For Saquon Barkley, the crew from "Good Morning Football" expects a strong season. Saquon Barkley has had a good start to his NFL career as the Giants Running Back. Since recording more than 2,000 yards from scrimmage on his way to bringing home the NFL Rookie of the Year award in 2018, Barkley followed that up by running in 13 games last year for over 1,000 yards. In both of his first two seasons, he was the first running back in Giants' history to pass for over 1,000 yards.

"Saquon Barkley is going to have a monster year," former Giant and current NFL Network analyst Shaun O'Hara said. "Not just because the Giants upgraded their offensive line with the fourth overall pick in Andrew Thomas, but I think Jason Garrett, the effect he's going to have on that offense, along with Joe Judge's accountability factor, this is going to be a totally different offense."

The 23-year-old has proven to be one of the most dangerous runners in the NFL, as well as being one of the toughest players to take down. While in his first two seasons he has already registered nearly 3,500 yards from scrimmage and 23 total touchdowns, the crew of NFL Network's "Good Morning Football" believes the young back might have his best season in 2020.

"I think Saquon is definitely going to be ready," former NFL fullback Michael Robinson said. "I think Saquon is going to have a beast of a year, definitely. A new, young head coach (Joe Judge), over 1,000 yards last year in 13 games. Saquon Barkley is one of the most explosive players. Forget running backs or wide receivers, whatever.

Luckily for Saquon, in the 2020 season he'll be working with an offensive coordinator who knows how to make good use of the run game. This will help further capitalize on Saquon’s strength and have been the man to have the highest rushing yards this upcoming season. Jason Garrett served with one of the league's best, Ezekiel Elliott, for his last four seasons as the Dallas Cowboys head coach. For three of his four seasons, the star back reached the 1000-yard mark and is a two-time NFL leader for running yards. It seems that with all of Saquon’s past achievements and his new coaching staff, this makes him destined to have the highest rushing yards.

"Talking to him this offseason, this guy is motivated to do some big things,” concludes former NFL fullback Michael Robinson.