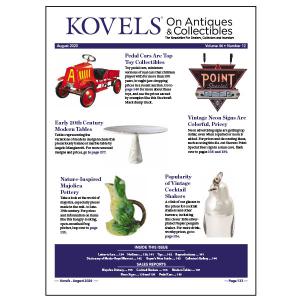 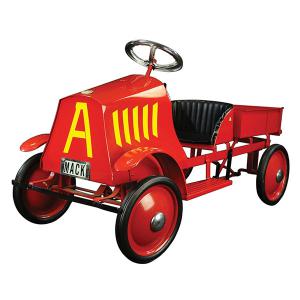 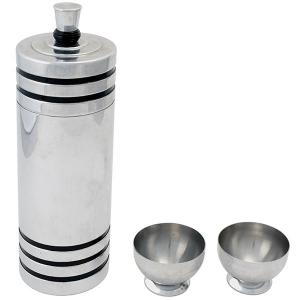 Neon advertising signs brought excellent prices at auction in Pennsylvania and they are featured in a sale report in the August 2020 issue of Kovels On Antiques & Collectibles newsletter. An all-original sign advertising Pacific Bait & Tackle with a neon fish jumping out of a pond took top honors, selling for more than $23,000. It’s pictured along with other flashy signs and their hefty prices.

Prohibition-era barware brought high prices in an online-only auction from New York City. Kovels’ says “Cheers!” to cocktail shakers from the 1930s and the August newsletter pictures figural examples, such as a penguin, lighthouse and bell, alongside shakers with Bakelite details and accessories, with winning bids that peaked at a stunning $23,000.

Nearly a dozen pedal cars, miniature versions of motor-driven vehicles, were included in a toy auction in New Jersey. Kovels’ August issue pictures a 1950s fire engine pedal car that sold for a little ($300), an antique convertible model that sold for a lot ($10,000), and other vintage and contemporary examples that zoomed in between.

A Chicago auction included tables by modernist designers who are known for experimenting with new shapes and materials. Find edgy and unusual tables by big names such as Gio Ponti, Gae Aulenta, Milo Baughman and Isamu Noguchi in Kovels’ August issue. And more than 500 lots of brightly colored majolica with naturalistic themes auctioned in Indiana. Kovels’ pictures an assortment of whimsical late-18th-century majolica items, decorated with sunflowers, monkeys, frogs and flowers, with their prices.

Kovels On Antiques & Collectibles newsletter is available as a print subscription, or as a digital version that is included in the Kovels Knowledge and Kovels All Access.

About Kovels.com
Kovels.com, created by Terry Kovel and her daughter, Kim Kovel, provides collectors and researchers with up-to-date and accurate information on antiques and collectibles. The company was founded in 1953 by Terry Kovel and her late husband, Ralph. Since then, the Kovels have written more than 100 books and hundreds of articles about antiques, including the best-selling annual Kovels’ Antiques & Collectibles Price Guide. Their nationally syndicated antiques and collectibles column is distributed by King Features Syndicate to many newspapers nationwide. Terry and Ralph starred in television series on PBS, the Discovery Channel, and the Home & Garden Television (HGTV). The website, Kovels.com, online since 1998, offers more than a million free prices, and includes a free weekly email, “Kovels Komments.” It gives readers a bird’s-eye view of the market through the latest news, auction reports, a Marks Dictionary, readers’ questions and answers and much more.