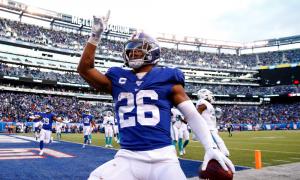 The annual NFL Top 100 countdown placed Barkley at No. 31 overall.

LOS ANGELES, CA, UNITED STATES, August 4, 2020 /EINPresswire.com/ — Saquon Barkley, Penn State star, has rapidly developed into one of the most influential players in the NFL. He recently made a repeat appearance on a top-100 list compiled by professional peers and released on the NFL Network this week. The annual NFL Top 100 countdown placed Barkley at No. 31 overall. It is a bit of a slip from No. 16 last summer with a reasonably responsible medical setback for that result.

"Barkley swiftly dodged excuses like an incoming linebacker, but it was clear he wasn’t right for much of the season," reads the NFL Network. "He returned three weeks after suffering an ankle sprain in Week 3 that was expected to keep him out up to eight weeks."

"It took a 92-yard effort in Week 17 to get him to 1,003 on the year, but, in doing so, he became the first Giants RB to begin his career with consecutive 1,000-yard seasons," the NFL Network continued. "An offseason of rest and rehab should result in the ever-competitive Barkley resembling his monstrous rookie form in no time."

Barkley, who was named to the All-Decade Team of the Big Ten Network earlier this month, ranks already sixth in the history of the Giants, one dating back to 1925, with 11 100-yard rushing attempts. Last fall, he set a Giants record with 279 yards of scrimmage (189 rushing and 90 receiving) in an overtime victory over the Redskins in Week 16. No NFL player had generated more scrimmage yards last season in a single game. He managed 1,441 yards, 438 as receiver, through 269 touches during a 4-12 campaign in which no other New York player exceeded 800 total yards.

The 2018 NFL Draft No. 2 overall pick, Barkley received the season's Rookie of the Year honors at the end of the season. He scored 15 touchdowns and became just the third player to reach 2,000 all-purpose yards (2,028) in NFL history. Barkley set school records for total touchdowns (53) and all-purpose yards (5.538) over three seasons at Penn State, shining as a runner, receiver and kick-returner on the way to All-American honors. Barkley is the highest draft selection to come out of Penn State since 2000, when the Cleveland Browns and Washington Redskins respectively drafted the defensive lineman Courtney Brown and the safety LaVar Arrington first and second overall.

Barkley, along with Tampa Bay Buccaneers receiver Chris Godwin (No. 38) and Chicago Bears receiver Allen Robinson (No. 93), was one of three former NFL 100 Penn State stars. The list was led by 2019 NFL MVP Lamar Jackson, the Baltimore Ravens quarterback.