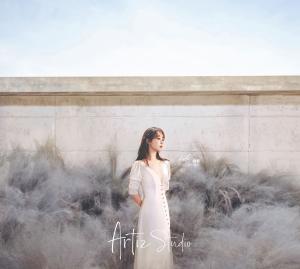 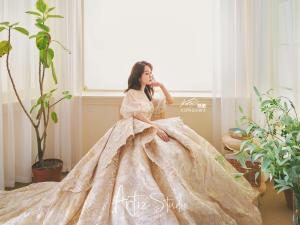 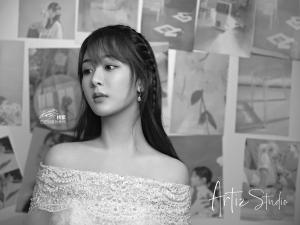 Adapting from tales of legends, in the distant country at the end of the clouds, there lived an elf named Queenie. She is the incarnation of love, symbolising bravery, self, pursuit of dreams and all the good things. YANG ZI (杨紫) perfectly embodying what Artiz Studio new series stands for took lead on this concept. Now, residing on the isle of Jeju brings forth TARA’s new concept “Crown Grass” enveloped in a new shade of ash-grey. The crown grass thus simulates pastures on valleys and wild mountain with waves of sea breeze in the air. Clothe in an ivory white gown embellished in crystal complements the setting flawlessly, creating a fairy-like aura

Yang Zi who is an award-winning Chinese actress and singer whose career began when she was just a child is also crowned and considered to be one of the “Four Dan of Actresses of the Post-90s Generation” along with Zheng Shuang, Zhou Dong Yu and Guan Xiao Tong. Yang Zi has made her acting debut in the 2002 television series “Ru Ci Chu Shan” and has since starred in many popular films and television dramas, including "Battle of Changsha" (2014), “Ode to Joy” (2016), “The Legend of Chusen” (2016) ,“The Legend of Chusen 2” (2016-2017) and “Ashes of Love” (2018). In 2019, Yang Zi completed another drama with co-star Li Xian called "Go Go Squid".

Standing amongst Jeju island’s crown grass, bathe in Mediterranean sunshine with waves of California sea breeze rushing through coalesce natural elements to bring forth a unique artistic tone setting, inspiring brides all around the world. The background concept will soon be release and accessible in the various Artiz Studio establishments with couples being able to capture the same scene as Yang Zi.

Korea Artiz Studio was founded in Busan, South Korea in 2008 and has since become the most fashionable and popular Korean style wedding photography brand around the world serving over 20 MILLION couples to date. Specialising in High-End Korean Theme Wedding Photo/Videography & Bridal Boutique, Artiz Studio has worked on projects together with over 200 of the world's most renowned celebrities and has taken the lead in developing partnerships with star designers. The brand targets young consumers with a focus on the generation born between 1990 and 1995, as well as those born after 1995, creating major opportunities for wedding service providers. Artiz Studio is also well known for its professional, high-end services available worldwide. Artiz Studio currently owns and operates 45 photography studios around the world, having established itself as a trendsetter in the luxury wedding photography market through its adherence to world-leading standards and services.