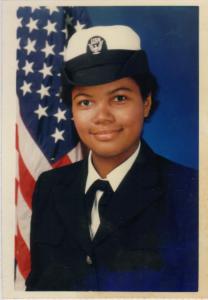 A biracial woman spent 11 years living in Japan. During her time there, she ate well and learned how to appreciate Japanese cuisine's health benefits.

I am not your typical Japanese translator or scholar," Brown said. "I am a plus-size woman with a big Afro and has a big laugh.”
— Cydonie Brown

A life lived globally comes home to Taftville, Connecticut as resident Cydonie Brown has begun sharing her experiences through an international channel of food, energy, and culture.

Brown, a biracial black/Native-American woman, spent 11 years living in Japan. During her time there, she ate well and learned how to appreciate Japanese cuisine's health benefits.

"When I first walked into a Japanese bar, the food presentation was mesmerizing," Brown said. "The colors, textures, and the presentations were out of this world."

Viewers are exposed to her encyclopedic knowledge of traditional Japanese cuisine and presentation. The channel makes use of animated characters popular overseas and presents cooking advice in multiple languages. It certainly feels straight from Japan.

"I am not your typical Japanese translator or scholar," Brown said. "I am a plus-size woman with a big Afro and has a big laugh."

With YouTube as her medium, Brown has joined two others; a college professor and a Japanese mother in Los Angeles—together, they share the sights, sounds, and intricate recipes of Japan. Their channel: "Foodots." The format is fun and unfussy, as they cover all the tools and tips needed for the average cook to enjoy the best of Japanese cuisine.

"I was surprised that the show is well received in fifty countries," Brown said. "Diversity of my life experiences as a National Park Ranger, military veteran, and being bilingual gave me the confidence to know that I can accomplish anything."

Brown's ties to the island nation are as unique as they are deep. She served there in the United States Navy as a Radio Intelligence Specialist, later as a housewife; she even held a supporting role in a Japanese television drama.

Japanese food and culture will once again enter the international spotlight with the rescheduled 2021 Summer Olympic Games' arrival. As local media outlets look to advance their programming or follow the networks' coverage, Brown can be made available as a regional voice relating food advice and experiences to the local audience. Her knowledge and skills make her an excellent guest on food segments discussing Japanese cuisine that can be made here in the states.

To learn more about Brown or to watch their latest productions, you can visit the channel
at https://www.youtube.com/watch?v=3D35cfkpG6g
or contact: cydonieb@gmail.com