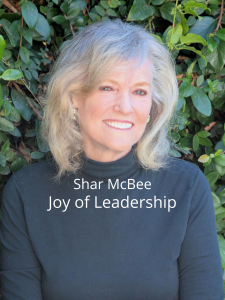 Leaders need balance so they no longer reel between hope and fear, expansion and contraction, pain and pleasure, success and failure.”
— Shar McBee, Joy of Leadership

LOS ANGELES, CALIFORNIA, UNITED STATES, March 3, 2021 /EINPresswire.com/ — What do yoga and leadership have in common? “Everything,” according to Shar McBee at Joy of Leadership, a leadership training company in Los Angeles. “In Sanskrit ‘yoga’ means union. It can help you to renew and expand yourself through empowering and connecting with others.”

McBee is the author of three bestsellers including To Lead is to Serve and Leadership with a Twist of Yoga. She says, “The warrior pose creates strength and courage. For example: An executive was rehearsing a speech, but it was weak. He had no oomph. So, I asked him to practice in the warrior. He got better, but not enough. Finally, I said, ‘You were given that big body. Use it to serve.’ Wow. He looked like a Picasso painting going into alignment. Both he and the speech became powerful. He went home happy, as was I.”

“The next day his wife called and asked, ‘What did you do to him? He came home transformed.’ Then she explained, ‘He thinks people are afraid of big, black men. His entire life he’s tried to make himself look smaller. The words, ‘Use your big body to serve,’ changed everything.’ Later, this man became the CEO of an international corporation.”

McBee asserts that fear creates rigidity. Authenticity makes people flexible, which is needed by leaders in today’s environment. She says, “When your body, mind, emotions and energy are in alignment, you’ll do the best work and be the best that you can be as a leader. When you are out of balance, you are a big mess. The man preparing the speech was tangled in a basic human struggle between contraction and expansion. Contraction to protect himself and the basic human desire to expand and grow. When he gained insight into his own nature, he was able to be at peace with himself.”

“Through unity we tear down walls that stand between us and the people we work with,” McBee continues. “He had built a wall to protect himself and it walled him in, kept him down. It limited his ability to be his best. This is an endless cycle with we human beings. We have a problem; find a solution; then the solution becomes a new problem. His problem was the fear of being feared for his big body. The solution was to crouch and make himself look smaller. But the ‘solution’ became a problem when he wanted to expand.”

McBee concludes: “Leaders need balance so they no longer reel between hope and fear, expansion and contraction, pain and pleasure, success and failure. When they are in balance they function at their best. Any body type can benefit. In our Joy of Leadership development programs, no yoga mats are required. The yoga is gentle enough to do at work in a suit or stilettos.”

Leadership Training with a Twist of Yoga