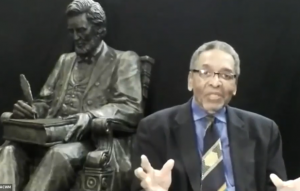 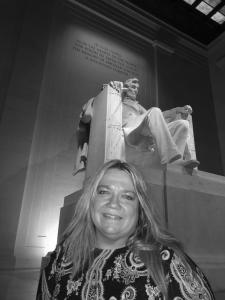 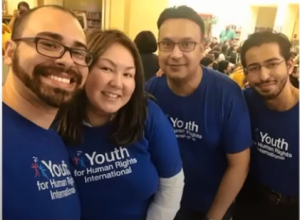 A few of the Youth for Human Rights DC members at a school prior to the pandemic. Azhar Haq, second from right.

Youth for Human Rights holds discussion on the vital role of Black soldiers and Frederick Douglass in the Civil War, and the fight against modern-day slavery.

Slavery was such a cruel, awful institution that the abolitionist movement wanted to have it gone.”
— Dr. Frank Smith, Founder African American Civil War Memorial and Museum

WASHINGTON, DISTRICT OF COLUMBIA, UNITED STATES, March 4, 2021 /EINPresswire.com/ — Many people are unaware that a significant portion of the Union Army and Navy were, in fact, the “Colored Troops” (as they were known then). Yet the outcome of the war hinged on the over 10% of Union troops who were men of color while almost 20% of the Union Navy were men of color.

In fact, those who were formerly enslaved had to fight for their right to help in the war. Dr. Frank Smith, former DC City Councilman and Founder of the African American Civil War Memorial Museum in Washington, DC, detailed some of the struggles to gain the right to fight in the war and the debate within communities of color. Some wanted nothing to do with the United States and didn’t consider it to be their battle, while many argued that it was the way for those formerly enslaved and freemen to have rights. Frederick Douglass was one of the main proponents pushing escaped slaves and free men of color to enlist, and his image was on posters promoting recruitment. Two of Frederick Douglass’ sons enlisted in the Union army and fought as part of the war effort. According to Dr. Smith, Douglass argued that fighting in the Civil War was critical to getting equal citizenship for Black men.

Frederick Douglass and other prominent abolitionists urged Black men to enlist and help to win the war. As Dr. Frank Smith pointed out, “Slavery was such a cruel, awful institution that the abolitionist movement wanted to have it gone.”

Over 209,000 Black men joined the Union troops in the Civil War. Of these recruits, 150,000 were slaves when they enlisted. Several military leaders issued proclamations in their areas which allowed black men to fight. To increase the enlistment, on July 17, 1862, Congress passed the Second Confiscation and Militia Act, freeing slaves who had masters in the Confederate Army. According to Dr. Smith, this was a way for President Lincoln to arm these newly freed slaves and make them part of the fight as Union troops.

This had not been well-documented and well-taught history. So Dr. Smith created the African American Civil War Memorial and Museum in the heart of Washington, DC, to encourage Americans to learn more about their history. The museum has expanded with more exhibits and is soon to complete a major renovation and expansion into a much larger nearby facility. Anyone can visit the museum, or go to their website, www.afroamcivilwar.org, to learn more about the impact of Black soldiers on the Civil War and securing voting rights for African Americans.

Tying this Civil War history to the modern-day fight against slavery, Dottie Laster, founder of Trafficking Victims Rescue Central, talked about how Frederick Douglass inspired her as a child and continues to cause her to fight against human trafficking daily. Ms. Laster commented that, “Douglass never accepted that he could be enslaved. He learned to read and realized that it was key to his freedom. He realized that [slavery] was not right, not to be tolerated.”

However, while the institution of slavery was defeated in the Civil War, action is still vitally needed today to fully eradicate the forms of slavery that still exist. Ms. Laster urged the attendees to fight slavery in all its forms, including modern human trafficking, both for sex and labor trafficking.

“Slavery is actually more prolific now than when it was legal,” said Ms. Laster. The number of people estimated to be held in slavery around the world this century is much higher than in the 1800s.

Wrapping up the panel discussion of the Civil War and modern-day slavery, the President of Youth for Human Rights DC, Mr. Azhar Haq, talked about the importance of human rights education in the prevention of modern-day slavery. It has been found that traffickers often prey on and try to manipulate those with low self-confidence and low self-esteem. Conversely, when kids are taught their human rights, they become more self confident. They are less likely to attract traffickers and will more effectively fend off and/or report the advances of would-be traffickers. One cause of low self-esteem is bullying in school; thus bullying is a key target for Youth for Human Rights in its prevention efforts.

“Youth for Human Rights DC has had some schools call [for seminars] because they have a lot of bullying,” said Mr. Haq. “We have gone back to the schools after doing human rights seminars and the incidents of bullying have gone down.”

Improving human rights for all youth can help reduce human trafficking by empowering youth and training them to fight for their rights and to respect the rights of others.

Youth for Human Rights DC created this panel discussion in honor of Black History Month relating this important Black history to the Universal Declaration of Human Rights (UDHR). The UDHR was adopted by the UN in 1948 and it is still the internationally accepted standard for human rights. Article 4 of the Declaration states: “No one shall be held in slavery or servitude; slavery and the slave trade shall be prohibited in all their forms.”

Youth for Human Rights International (YHRI) is an nonprofit advocacy group formed in 2001 that promotes human rights education throughout the world. YHRI has gotten out over four million free booklets, videos, and informational materials about the UN Universal Declaration of Human Rights and has chapters in nearly 100 countries around the world working in their local communities to teach human rights. Youth for Human Rights works to inspire youth to become valuable advocates for tolerance and peace. YHRI advocates for human rights both in the classroom and in nontraditional educational settings such as through art series, concerts and other interactive community events, including regional and international human rights summits which bring youth together from across whole sectors of the world. Their most recent campaign has included #KnowYour30 with the deliberate purpose of increasing awareness of the 30 human rights every person has – and how they are a part of everyday life. To learn more about human rights go to https://www.youthforhumanrights.org. For a documentary on Youth for Human Rights and its founder, go to https://www.scientology.tv/series/voices-for-humanity/mary-shuttleworth.html