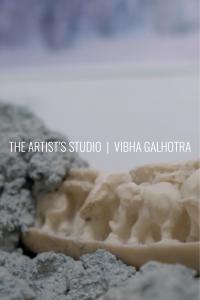 NEW DELHI, DELHI, INDIA, March 4, 2021 /EINPresswire.com/ — Kiran Nadar Museum of Art presents 'The Artist’s Studio', an online series where artists discuss their practice and artworks that are part of the museum collection and exhibitions.

Fourth in this series is a visit to Vibha Galhotra’s studio in New Delhi. Born in 1978 in Chandigarh, Galhotra completed her BFA in Graphics from Government College of Arts, Chandigarh followed by a MFA in Graphics from Kala Bhavan, Visva Bharati, Santiniketan. Her oeuvre encompasses sculpture, photography, printmaking, video and installation works addressing pertinent issues related to the environment, cityscapes and socially constructed systems. Galhotra often uses found objects to create her sculptures and installations.

The first episodes of this online series featured – 'The Artist’s Studio|Sumakshi Singh’.

Sumakshi Singh’s studio at Gurgaon. Born in 1980 in New Delhi, Sumakshi completed her BFA from Maharaja Sayajirao University, Baroda (2001) and received an MFA from the School of the Art Institute of Chicago in 2003. Her art practice consists of interactive installations, drawings, thread-work, animations and architecture interventions in turn transforming space and form to a new dimension.

Second in this series was a visit to Gigi Scaria’s (@scariagigi) studio in Greater Noida. Born in 1973 in Kothanallur, Kerala, he completed his Bachelors from Trivandrum followed by an MFA from Jamia Millia Islamia, New Delhi. His art practice has largely developed around the concerns of urban cityscape and planning. Through installation, photography as well as paintings, he deploys a vast range of idioms from history, mythology and architecture, as he investigates the socio-economic hierarchies layered within pertinent issues like migration and displacement. For an artist who dabbles in diverse mediums, here we explore a few of Gigi’s artworks from the KNMA collection as well as his idea of a studio space – nestled within the quintessential and ever-booming urban landscape.

Third in this series was a visit to GR Iranna’s studio in Okhla. Born in 1970 in Sindgi, Karnataka, Iranna completed his BFA in painting from College of Visual Art, Gulbarga followed by a MFA in painting from College of Art, Delhi. Through his paintings, installations and sculptures, Iranna showcases different socio-political and cultural issues, abstract concepts of force, the cycle of birth and rebirth and various contemporary issues. We explore Iranna’s studio practice as well as a few of his artworks from the KNMA collection.

The Kiran Nadar Museum of Art

Established by art collector Kiran Nadar in 2010, the Kiran Nadar Museum of Art (KNMA) is the first privately-funded museum of art exhibiting modern and contemporary works from India and the sub-continent. Located in New Delhi NCR, India’s capital city, KNMA hosts an ever-growing collection of artworks that both highlights a magnificent generation of 20th-century Indian painters from the post- Independence decades and engages with the different art practices of younger contemporaries.

Sponsored by the Shiv Nadar Foundation, KNMA is focused on bridging the gap between art and the public and fostering a museum-going culture in India. KNMA aims to become a place for confluence, dialogue and collaboration through its curatorial initiatives and exhibitions, school and college workshops, art appreciation discourses, symposiums, and public programs.