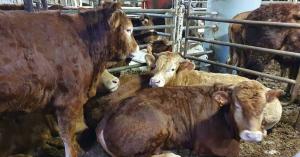 Cows trapped aboard the Karim Allah. 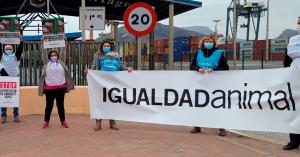 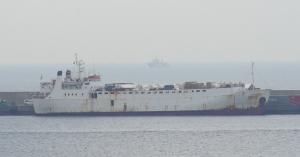 Karim Allah docked at the port of Escombreras on March 5, 2021

My heart breaks for the cows and calves who have died on these ships. To ensure animals no longer suffer on these unregulated journeys, the export of live animals must be immediately banned.”
— Sharon Núñez, President of Animal Equality

CARTAGENA, SPAIN, March 5, 2021 /EINPresswire.com/ — The journey of the cows and calves aboard the Karim Allah has come to an end. After suffering for two and a half months drifting across the Mediterranean Sea, today Spain’s High Court of Justice of Madrid has agreed to deny the suspension of the Ministry of Agriculture, Fisheries and Food’s slaughter order. The suspension was requested by the lawyers of the Talia Shipping Line, which manages the Karim Allah.

The 864 surviving animals, out of 895 who were shipped originally, will be slaughtered at the dock of the Port of Escombreras in Cartagena, Spain, in compliance with the slaughter order. A tent has been installed at the foot of the Karim Allah, inside which they will be slaughtered, and dozens of containers will be used for the removal of the carcasses.

The cows will be killed despite the fact that they are healthy. According to the ship’s lawyers, the animals’ positive health was verified by external veterinarians hired by the ship.

After leaving Spain on December 18th, 2,671 cows and calves traveling on two ships—the Elbeik and the Karim Allah—had been drifting through the Mediterranean Sea after being refused entry in various countries, including Lybia and Turkey, due to reports that the animals had bluetongue, a noncontagious, insect-borne, viral disease that affects mammals like cows.

The animals, unable to find another country willing to accept them, had been trapped at sea without food or water before the Karim Allah returned to Spain on February 22. The Elbeik is currently waiting for the outcome of the situation aboard the Karim Allah before it arrives back in Spain. Unfortunately, many cows and calves died during these journeys due to insufficient living conditions.

Animal Equality’s investigations have routinely revealed the immense pain and suffering animals endure during live transport journeys, especially those by sea. Usually done without food or water, animals are shuttled across long distances by truck and boat, with many perishing along the way. Animals who die at sea usually end up being tossed into the water, with some even falling in while still alive. Those animals are presumably left to drown. Animals like the distressed cows on the Elbeik and Karim Allah aren’t unique and their traumas are bound to be repeated, given the lack of regulations on their export.

On February 27, Animal Equality protested the treatment of live transport animals in front of the Port of Cartagena and demanded the government of Spain ban live transport to countries outside the European Union. A petition in Spain to end live transport has already received over 33,000 signatures.

“It is imperative that the Spanish Government investigate who is ultimately responsible for this tragedy and hold them to account. My heart breaks for all those animals who have already died and for those who remain trapped on these ships. To ensure animals no longer needlessly suffer on these unregulated journeys, the export of live animals must be immediately banned,” says Sharon Núñez, President of Animal Equality.

ABOUT ANIMAL EQUALITY
Animal Equality is an international organization working with society, governments, and companies to end cruelty to farmed animals. Animal Equality has offices in the United States, the United Kingdom, Germany, Italy, Spain, Mexico, Brazil, and India.