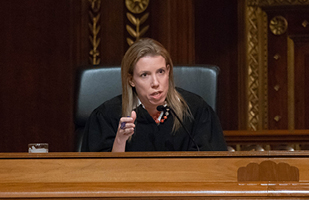 Sixth District Court of Appeals Judge Christine Mayle served as a visiting judge on the Ohio Supreme Court today and heard oral arguments in a case involving whether an attorney accused of incompetent representation and dishonesty should receive a two-year suspension.

According to the Ohio Constitution, in the event of a recusal by a justice the chief justice can select any of the 69 sitting Ohio appellate court judges to sit temporarily on the Supreme Court.

Today was Judge Mayle’s second  time serving as a visiting judge on the Court.

“The credibility of the legal system depends upon the fair enforcement of lawyers’ unique code of ethics, and it was an honor to serve in a matter of such great importance to our profession,” said Judge Mayle.